The Houbara belongs to the larger bustard family (Otididae), which consists of 11 genera, comprising 26 species and up to 39 subspecies. While ‘Houbara’ is a common name, the bird’s scientific name is derived from the Greek words chlamys, meaning ‘cloak’, and otis, ‘bustard’. The combination of these words, Chlamydotis, means ‘cloaked bustard’, which may be a reference to the impression of the male houbara bustard during its courtship display.

The Houbara was previously recognised as a single species with distinct geographical populations. However, based on genetic, morphological, geographic and behavioural criteria, it was split into two species in 2014:

The Asian and North-African Houbara differ in subtle variations of appearance.

The birds inhabit wide open landscapes from Northeast Asia and the Mongolian steppe, through Central Asia and the Middle East to North Africa and the arid Sinai desert.

The bird spends most of its time on the ground foraging for food. It is an omnivorous bird with a diet consisting of plants, seeds, insects, spiders, small rodents, and lizards.

The greatest threats facing Houbara are poaching, unregulated hunting, habitat loss through urbanization and agriculture, and habitat degradation through overgrazing.

The Houbara is an emblematic species in the heritage of the UAE and, as a leader in proactive species conservation, IFHC is committed to programmes that strive to educate the Emirati youth on the UAE’s abundant wildlife and natural environment.

A large Houbara bustard native to North Africa and southwestern Asia, where it lives in arid habitats.

The range area of the North-African Houbara extends from Western Sahara to Egypt. Unlike Asian Houbara, birds of this species do not migrate, and are limited to movements in their natural areas.

This species of bustard covers a wide geographical range from the Arabian Peninsula, Pakistan through to Kazakhstan.

After the Central Asia breeding season in spring, some Asian Houbara groups migrate southward to spend winter in warmer regions (the Arabian Peninsula, Pakistan, and nearby Southwest Asia). In the early spring, these groups return to their breeding habitats in China, Kazakhstan, Mongolia, and other north-eastern provinces.

Some groups of the Asian Houbara live and breed in the southern part of their habitats, including Saudi Arabia, the United Arab Emirates, Oman, Yemen as well as parts of Pakistan and Turkmenistan. 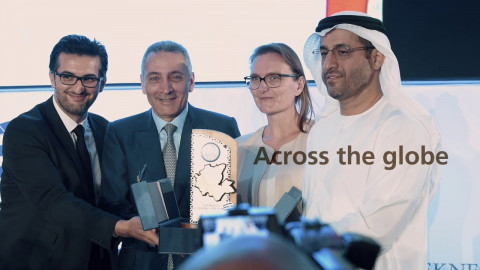 The Houbara Fund is a strategic partner with Connect with Nature to advance their work through supporting education and awareness among the youth in UAE.

Everyone plays a role in saving the Houbara. You can find out how to take conservation action to help this important bird in the UAE’s heritage.

For more information about the Houbara: