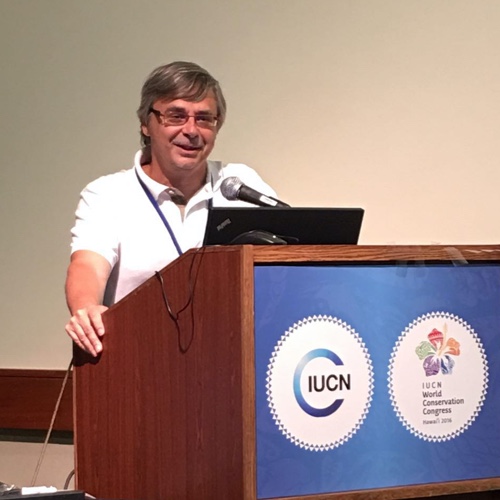 Dr. Launay started his career as a Wildlife Biologist in Saudi Arabia, where he established protected areas and conducted reintroduction programmes on several species. He moved to the National Avian Research Center (NARC) in Abu Dhabi to lead the organisation in its work on the study and conservation of the Houbara Bustard. In 1996, he became Assistant Secretary General for Science Programs at the Environment Research and Wildlife Development Agency (Now Environment Agency – Abu Dhabi), the government agency in charge of all environmental matters in Abu Dhabi Emirate.

In Addition, he became, the Director of the Emirates Wildlife Society-World Wide Fund in 2000.

In 2005, he became CEO of the Al Ain Wildlife Park and Resort, a $1.5 Billion redevelopment project, and in 2009, Director General of The Mohamed bin Zayed Species Conservation Fund (MBZ), a philanthropy dedicated to support species conservation worldwide.

The MBZ Fund has now supported over 1500 projects in over 140 countries. He re-joined the Environment Agency in Feb 2011 as the Senior Advisor of the Secretary General, while remaining at the MBZ Fund.

Dr Launay was the chairman of the IUCN/SSC Reintroduction Specialist Group from 1996 to 2013 and is a member of the IUCN/SSC Steering Committee for the past 12 years. He also represents IUCN/SSC as the biodiversity expert on the UNESCO World Heritage Site Committee.

He is a Board Member of the Sahara Conservation Fund and a Fellow of the Zoological Society of London.

In his free time Dr Fred likes to race motorbike.